Sometimes It Isn’t Fun to be Right 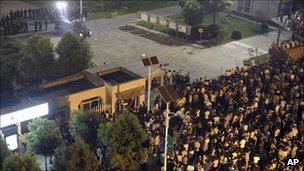 Just as we feared, communities are being polluted due to toxic releases from irresponsible solar companies.

The protesters complained that the factory spews dense smoke from a dozen chimneys and that fish are dying from Jinko factory waste dumped into a nearby river.

This type of pollution should not happen in a “green” industry.  But unfortunately it doesn’t surprise us.  In 2009 SVTC released a report warning of the potential dangers from the solar industry’s use of toxic materials.

At SVTC, we don’t want to see the solar industry follow the same toxic path of other high tech sectors.  We believe in the industry’s potential to live up to its green image by reducing and eventually eliminating toxic chemicals.

Since the 2009 launch of our “Toward a Clean and Just Solar Energy” campaign, SVTC has surveyed solar companies annually on their corporate and environmental practices and released the results in a Solar Scorecard.  The Scorecard is an important tool to identify companies that have made commitments to improve their environmental performance and transparency in their business practices. The 2011 Solar Scorecard represents nearly half of the industry market share.  While many of these companies have a long road ahead to be considered truly “green,” we applaud their initial willingness to disclose information.

Others – like Jinko Solar – are simply not responding.  Now we know why Jinko Solar has been trying to live in the shadows – they have been operating irresponsibly, harming their surrounding community, and building a dark reputation for the solar industry.

We are sorry for the people of China’s Zhejiang province who live and work in the shadow of pollution.  We are equally inspired by the community’s courage to stand up against a powerful company that is harming them.

We encourage you to use the Solar Scorecard and only buy from companies who are focusing attention on reducing toxics and protecting workers, communities and the environment.  The solar industry has a critical role to play in meeting the challenges of climate change.

Together we can ensure that it is a truly “green” industry.